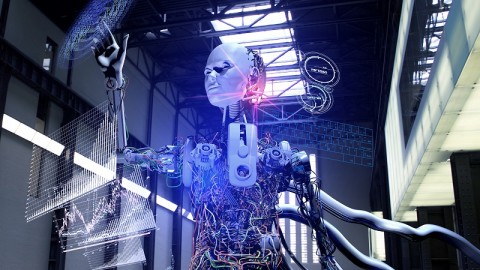 The Edinburgh Centre for Robotics has joined forces with The State Key Laboratory of Robotics in Shenyang to work on joint research projects in marine robotics, nano robotics, electric power industry robotics and medical robotics.

Heriot-Watt University made the announcement during the First Minister’s five-day trip to China. The delegation includes university academics and aims to build links and showcase Scottish business.

Now a Memorandum of Understanding has been signed between both institutions, with marine robotics beginning the academic collaboration.

First Minister Nicola Sturgeon, said: “I am pleased that the Edinburgh Centre for Robotics has agreed this partnership. During my visit to China I have been struck by the scale of academic collaboration there is between institutions in Scotland and China.

“This is another example of how sharing knowledge and expertise can bring benefits to both countries.”

Professor David Lane, founding Director of the Edinburgh Centre for Robotics, said: “We’ve been speaking in-depth with the State Key Laboratory of Robotics for a number of months, and it’s fantastic to see the partnership up and running.

“This closely forged relationship will only benefit our already highly-successful cutting-edge robotic and artificial intelligence research.

“It is fantastic news for both Scotland’s economy and further education system as there is a need to deliver highly sought after graduates and research in the robotics field.

“Both countries will now be able to benefit from a highly skilled, collaborative team of robotic experts.”

Professor Shuo Li, deputy director of The State Key Laboratory of Robotics, said: “We’re delighted to sign this very significant Memorandum of Understanding with the Edinburgh Centre for Robotics.

“Not only will it establish a collaborative relationship in scientific research, personnel visiting and scholar exchange – it will also bring two countries together in a very highly skilled research industry.”

The State Key Laboratory in Robotics are a top Chinese Academy of Sciences funded lab. Robots from their spin out company Siasun were used in the closing ceremony of the Winter Olympics.