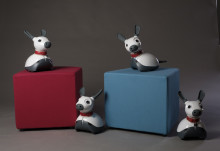 The event took place on Saturday 21st April at Easterbrook Hall in Dumfries.  Students demonstrated some of the small robots that belong to Edinburgh Centre for Robotics and the Robotics Society, showing the audience the inner workings of the robots and explaining how robots can walk and talk, and are aware of surroundings and people. The younger members of the audience were mainly interested in playing with robots, which is undeniably the first step towards acceptance of the robots in society.

Attendees were fascinated by the variety of robots available and their applications in industry and in the home, with the event being hailed as a success in educating the public about robots and their impact.

Boris Mocialov, one of the main organisers reported that the smiles of the people, who were leaving the venue were brighter than the sun outside on the day.