Current industrial sorting systems allow for low error, high throughput sorts with tightly constrained properties. By designing a sorter using modular robots I will allow for adaptive sorting that can rapidly change sorting methods and criteria while being safe for physical human interaction. The adaptability of the system allows for multimodal sorting and can improve heterogeneous sorting systems.

A need for adaptive sorting comes from systems that involve a high throughput of heterogeneous items such as import testing by port authorities, warehouse sorting for online retailers, and sorting recycling. The variety of goods that need to be sorted in these applications mean that existing sorting systems are unsuitable and the objects often need to be sorted by hand.

During my project I aim to design and build a modular, robotic sorting system using linear actuating robots underneath a film to create both low-frequency vibrations and peristaltic waves for sorting. I will use machine learning to control this system as it has many degrees of freedom which makes it difficult to write a controller.

I am currently working on scene understanding for XR devices at Meta in Zurich. 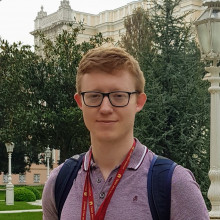