It is known that dragonflies use an interception prey hunting strategy rather than a tracking approach [1]. Central to this strategy these insects must fixate their prey on the high resolution area of their compound eyes (which are rigidly attached to their head). Their hunting strategy is to approach prey from below and behind, aligning their direction of motion with that of the prey. This strategy typically requires extreme body angular accelerations in the initial phase of each pursuit. During this period, it is essential that their gaze remains fixed on the target. Recent work involving motion capture systems has revealed that dragonflies possess the ability to predictively compensate for retinal prey drift caused by their own body rotations and relative prey translation. It is hypothesised that this must involve internal models of some description, the construction and accuracy of these models is unknown.

2. Develop a simulation environment that can be used in order to evaluate kinematic and dynamic models of flying insect behaviours.

3. Develop a robotic platform for the investigation of visually guided behaviours in flying insects.

In 2008 I graduated from the Uinversity of Sheffield with an Meng in Mechatronics and subsequently worked at JaguarLandrover for five years as an electrical systems engineer. During this time I developed distributed safety critical security systems, such as electronic steering column locks for keyless entry cars. I left Jaguarlandrover in 2013 in order to travel. Between 2014 and 2015 I worked briefly for Martin Aircraft as an aircraft systems engineer. 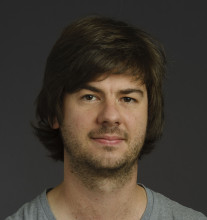