Consequently, a novel dopaminergic plasticity rule was developed to approximate the function of dopamine as the plasticity mechanism between neurons in the insect brain. This allowed a range of observed learning phenomena to happen in parallel, like memory depression, potentiation, recovery, and saturation. In addition, by using anatomical data of connections between neurons in the mushroom body neuropils of the insect brain, the neural incentive circuit of dopaminergic and output neurons was also explored. This, together with the dopaminergic plasticity rule, allowed for dynamic collaboration amongst parallel memory functions, such as acquisition, transfer, and forgetting. When tested on olfactory conditioning paradigms, the model reproduced the observed changes in the activity of the identified neurons in fruit flies. It also replicated the observed behaviour of the animals and it allowed for flexible behavioural control. Inspired by the visual navigation system of desert ants, the model was further challenged in the visual place recognition task. Although a relatively simple encoding of the olfactory information was sufficient to explain odour learning, a more sophisticated encoding of the visual input was required to increase the separability among the visual inputs and enable visual place recognition. Signal whitening and sparse combinatorial encoding were sufficient to boost the performance of the system in this task. The incentive circuit enabled increasing confidence when familiar places were presented in a sequence but not necessarily in the correct order. Finally, the proposed model was challenged in delayed reinforcement tasks, and preliminary results suggested that the temporal resolution of the task is crucial for meaningful memory dynamics.

During his bachelor thesis in 2013 at the Aristotle University of Thessaloniki, Evripidis had his first experience in machine learning and artificial intelligence, under the supervision of Dr Grigorios Tsoumakas; he explored the performance of Deep Belief Networks (DBNs) on multi-label classification problems, including medical, image, sound and text datasets. In July 2013, he achieved the 1st class honours BSc degree in the same university with a specialisation in Information Systems. In May 2014, Evripidis started working as a research assistant on human motion analysis at the Centre of Research and Technology - Hellas (CERTH) under the supervision of Dr Petros Daras, when he realised his passion for research. He was working on motion analysis of athletes performing sports, trying to use machine learning to train a coach that gives hints of how to improve their performance. Later, in September 2015, he decided to extend his knowledge of artificial intelligence by joining a homonymous master's programme at the University of Edinburgh under the UK/EU masters scholarship awarded from the same university. It was then when he met Prof. Barbara Webb, who introduced him to the multidiscipline field of bio-robotics and insect robotics. She supervised his master thesis, where he successfully tried to model the evasion behaviour of the Australian fiddler crabs using a data-driven approach and semi-supervised learning. He graduated with distinction from the School of Informatics awarding the specialisation of Machine Learning in September 2016. Right after, he started working on building a robot that imitates the olfactory learning mechanism of the Drosophila larva with professor Webb as his advisor. While in the same institute, in March 2017 he started working on designing and modelling the celestial compass neural mechanism of the desert ants, under the same advisor and in collaboration with the University of Lincoln and the University of Sheffield (Dr Michael Mangan). His passion for the function of insect brains, bio-robotics and computational modelling led him to enrol on the ECR in September 2018, when he started his PhD. He is currently fascinated by the function of the mushroom body in the insect brain, how memories are established there and its multimodal integration mechanism. Therefore, he tries to understand and model it using computational intelligence mechanisms under the supervision of Professor Webb.

2015 - 2016 ⚮ MSc in Artificial Intelligence and Machine Learning (with Distinction), the University of Edinburgh, United Kingdom

2017, July. Predator Evasion by a Robocrab. In Conference on Biomimetic and Biohybrid Systems, Stanford University, CA.

Gkanias, E., & Webb, B. 2022, July. How could the mushroom body and central complex combine for visual homing in insects? In International Congress of Neuroethology, Lisbon, Portugal.

Gkanias, E., Scaria, A., Vladis, N. A., Risse, B., Mangan, M., & Webb, B. 2019, August. Robustness of a model of the insects' celestial compass in realistic conditions. In International Conference on Invertebrate Vision, Bäckaskog Slott, Sweden. 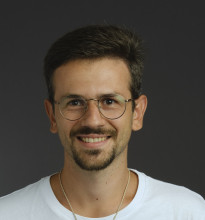