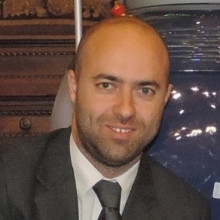 Dr. Filippo Cavallo with be hosting a joint seminar with University of Edinburgh and Heriot-Watt University. The dates and times are as follows:

Abstract: Nowadays service robotics is experimenting an increasing number of opportunities to be integrated in several scenarios of daily living, from the home to the city and at work. This trend comes with a number of scientific challenges in the field of robotics, all aiming to improve the robot capabilities and abilities. Hence, the integration of Robotics, Internet of Things and Artificial Intelligence is an interesting approach that enables the possibility to design and develop new frontiers in human robot interaction, collaborative robotics, cognitive robotics, etc. In this context, this talk aims to present the main results, achieved in our Assistive Robotics Lab (Scuola Superiore Sant'Anna, Italy), in the development of Social Robotics solutions integrated with wearable and environmental sensors, to provide useful services to citizens, specifically in the case of neurodegenerative diseases, cognitive frailty and in industrial settings.

Biography: Filippo Cavallo received the Master Degree in Electronic Engineering from the University Of Pisa, Italy, in 2003. In the same years he joined the ARTS Lab, Scuola Superiore Sant’Anna, Pisa, Italy as Research Fellow, working in movement analysis and pedestrian navigation. From 2004 to 2007 he defended his PhD degree in bioengineering at CRIM Lab, Scuola Superiore Sant’Anna, Pisa, Italy developing a complex platform for biomechanical analysis of surgeons’ gesture. During PhD he also joined the EndoCAS – Center of Excellence, Pisa, Italy working in Computer Assisted Surgery. In 2007 he spent three months at ROBO-Casa Lab at Waseda University, Tokyo, Japan, as Post Doctoral researcher visitor, studying and working on the wireless sensor network. From 2008 he has been Post Doctoral Researcher at ARTS Lab, Scuola Superiore Sant’Anna, Pisa, Italy working in the field Ambient Assisted Living (AAL). From March 2010 he received a grant from the Regional POR FSE 2007-2013 for a Research position at The BioRobotics Institute, Scuola Superiore Sant’Anna, Pontedera, Italy, where he has worked in the field of service robotics, ICT and AAL technologies. In summer 2012 he visited Tecnalia, a private R&D research entity in San Sebastian, Spain, working on wearable sensor system for AAL. His field of research is focused on biomechanical analysis, wearable sensor systems, sensor networking, localization and navigation system, biomedical signal and event processing, home automation, tele-care, acceptability and usability, ICT and AAL roadmapping. He participated in various National and European projects, is currently project manager of Robot-Era, ASTROMOBILE, RITA, AALIANCE2, Parkinson Project and is author of various papers on conferences and ISI journals. You may wish to view his publication list.