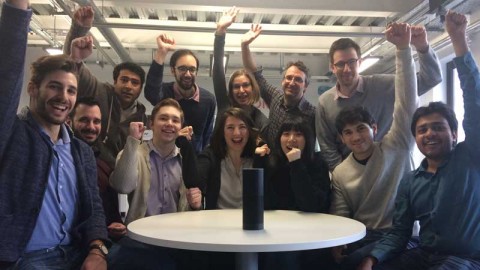 Heriot-Watt University’s reputation for AI and robotics has been bolstered after it was selected as the UK’s only entrant in this year’s $3.5 million Amazon Alexa Prize.

A seven-strong group of PhD students – named Team Alana - will once again go head-to-head with universities from around the world to develop an artificial intelligence software that can understand and respond to human conversation.

The task of creating a coherent and engaging socialbot continues to be the holy grail for artificial intelligence and a lot of great work is being done, particularly at Heriot-Watt.

It is the second year running Heriot-Watt has taken part in the coveted Prize having previously finished in an impressive third place - overcoming more than 100 entries from 22 countries.

This time round, Heriot-Watt is just one of eight international universities, out of 195 entrants, that passed Amazon’s rigorous selection process to take part in the competition.

Each team will now begin work on their ‘socialbot’ software, which will eventually be installed into the Amazon Echo.  In order to win the Prize the technology must be capable of conversing with humans on a range of topics such as entertainment, sports and technology.

The winners will be announced in November and will walk away with a $500,000 cash prize. Additionally, a $1 million research grant will be awarded to the team’s university if their socialbot achieves the grand challenge of conversing coherently and engagingly for 20 minutes.

Alana Team leader Amanda Curry, who is in her second year studying Computer Science, knows only too well the challenges that lay ahead having been part of the Heriot-Watt team that travelled to last year’s final in Las Vegas.

She said: “It’s such a thrill to be given this opportunity again and to reach the selection stage really is an achievement in itself.

“I was part of the previous team who finished third last year and, for me, there is a sense of unfinished business – I can’t wait to get started.

“Heriot-Watt has a growing international reputation as a leader in AI and robotics and I’m hopeful we can go a step further this year and win the main prize for the University and for Scotland!”

The Amazon Alexa Prize is an annual university competition dedicated to advancing conversational artificial intelligence. It is named after the Alexa voice command system that powers the Amazon Echo.

Professor Rieser said: “We learnt a lot from last year’s competition and that experience will, I’m sure, stand us in good stead.

“It was a wonderful challenge to be part of and we already have a number of ideas that will hopefully allow is to take the steps needed to win the overall prize.

“The task of creating a coherent and engaging socialbot continues to be the holy grail for artificial intelligence and a lot of great work is being done, particularly at Heriot-Watt.

“AI and robotics are increasingly more relevant to our daily lives as its advantages become ever clearer to us. It’s a hugely exciting industry to work in and one that is set to rapidly expand over the years to come.”

This view was echoed by Professor Lemon, who added: "Last year's challenge provided an amazing experience for all of us and the chance to drive some new advances in Artificial Intelligence.

"We are at the start of this journey again, with another chance to showcase our ability on a global stage."

Each team in the competition will receive a $250,000 research grant from Amazon as well as Alexa-enabled devices to support their development efforts.