Three of our RAS CDT students exhibited some of our robots at the IET headquarters in London as part of the Festival of Engineering in October. Siobhan Duncan has written about the experience:

Vibhav Bharti, James Horn and I travelled to the Institute of Engineering and Technology’s headquarters in London to represent the Edinburgh Centre for Robotics at their recent Festival of Engineering.

The IET headquarters are very beautiful, with a statue of Faraday on the outside and a modern LED display in the inner lobby which contrasts with the beautiful marble. Throughout the building there are busts of famous engineers and scientists, including both Maxwell and Kelvin. The exhibitor’s area was on the top floor, which has a terrace area with a view over the river, where one can see the London Eye, Big Ben, and the Parliament. A very impressive place to exhibit the work and robots of the Centre.

Since we were travelling by train, we decided to pack light and only take one NAO, three Spheros and Hamilton, in addition to lots of Centre, Year of Robotics and Heriot-Watt branded promotional material and banners which had been shipped ahead.

Once we got our stand set up, we set the NAO to dance and as usual it drew a large crowd of both children and adults, mesmerised by its cool moves to tunes like Thriller, Macarena and Gangnam Style. The NAO is a great tool for engaging people with robotics as it has a wide range of movements, allowing it to dance or mimic movements like push-ups.  Its functionality such as the ability to play sounds effects allowed us to combine R2D2 sound effects to go with a Star Wars routine. Young children really enjoy mimicking the robot, speaking to it, and giving it a wee cuddle. In addition to being adorable, this affinity with the robot can really help alleviate fears or worries about robots being evil or scary that they might have picked up from film and television.

Since we had multiple Spheros with us, we could also set two at a time to race each other around the exhibitor’s area. Although the NAO is a crowd pleaser, kids really engage with activities they can directly be involved in and to them nothing is more hands on than a remote controlled robot to race with.

It’s also really rewarding when the audience recognises robots from previous events as it highlights that such outreach activities have a lasting impact after we pack up and go home. Our table had a computer screen looping through various photos and videos produced by the Centre, and many of the people who visited our stand recognised the Miros and Pepper from Blue Peter, and of course  Professor Sethu Vijayakumar from Robot Wars.

Although it’s a children’s event, it’s easy to forget that there is a large percentage of adult attendees exhibiting at other stand, mentoring children and running the event. We were pleasantly surprised by their interest and even managed to convince a handful of young professionals to apply to our CDT programme in 2018.

As is usual at these types of events, you get the same group of children who come back throughout the day, hoping for a 2nd, 3rd, …, nth turn with the robot because they are really excited about the activities we have. This gives you the perfect chance to try and encourage their interest and explain the link between STEM subjects and a career in robotics.

All in all this was a great opportunity to engage with a new group of young people and we are really grateful to the IET for organising the event and the ECR for providing us with the opportunity, sponsorship and tools needed to exhibit.

For more information about the IET Festival of Engineering, visit http://www.engfest.org/ 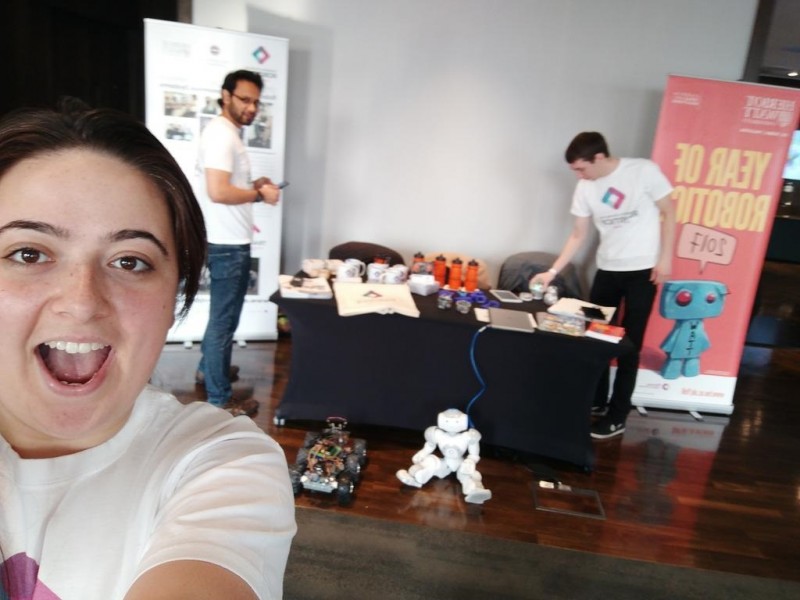