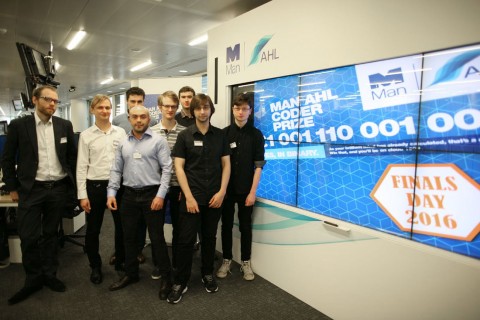 Marian Andrecki, MSc by Research student at Edinburgh Centre for Robotics, was shortlisted for the finals of the Man AHL Coder competition. The top eight entrants have been invited to the Man AHL office in the City of London on 12th February 2016 for the final ‘Code Off’ to establish the winner of the competition and the £5,000 prize. Marian said,

“During this project I explored mostly traditional AI methods such as graph searches to find best moves for the player. However, I used some concepts from Reinforcement Learning as well. These areas are relevant to autonomous systems making decisions about future actions. For example, it can be useful to allow a smart network of sensors to learn which sensors provide useful information in a given situation and which only bloat the required computation. This last example will be the focus of my Master's project.”

The Finals in London

The Man AHL Coder Prize 2015 set students in the UK and Ireland the challenge of creating an algorithm, written in Python, to conquer the classic game Hexplode. At the Finals, the code bundle was altered to introduce a new element to the game. Man AHL gave the finalists two hours to update their initial submission accordingly. The new codes were played off against the other finalists to determine the winner.