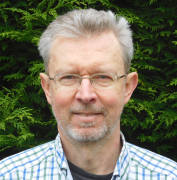 Professor Robert Fisher has been an academic in the School of Informatics (originally in the former Department of Artificial Intelligence) at University of Edinburgh since 1984 and a full Professor since 2003. He  received his PhD from University of Edinburgh (1987), investigating computer vision in the former Department of Artificial Intelligence. His previous degrees are a BS with honors (Mathematics) from California Institute of Technology (1974) and a MS (Computer Science) from Stanford University (1978). He worked as a software engineer for 5 years before returning to study for his PhD.