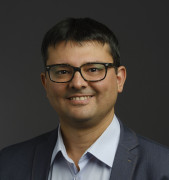 Dr Mustafa Suphi Erden is an associate professor at the Heriot-Watt University and specialises in assistive and medical robotics, physical human-robot interaction, and automation with robots. He received the B.S., M.S., and Ph.D. degrees in Electrical and Electronics Engineering from Middle East Technical University, Ankara, in 1999, 2001, and 2006. Between 1999 and 2006, he was a Research Assistant in the same department. From 2007 to 2012 he was a postdoctoral researcher, successively in Delft University of Technology, the Netherlands; in Ecole Nationale Supérieure de Techniques Avancées-ParisTech, France; in Univ. Pierre & Marie Curie – Paris 6, France. In 2012 he received the European Union Marie Curie Intra-European Fellowship with his project “Skill Assistance with Robot for Manual Welding” . Between 2012 and 2014, he was with Ecole Polytechnique Fédérale de Lausanne, Switzerland, with this fellowship. He is now an Associate Professor with the School of Engineering and Physical Sciences at Heriot-Watt University in Edinburgh, UK. His research interests include physical human-robot interaction, assistive robotics, skill assistance, mechatronics design, medical robotics, manufacturing, automation, marine robotics, control, machine learning, and social robotics. He has been the recipient of research funding of around £1.4M by the Engineering and Physical Sciences Research Council (EPSRC) of UK and £200K by industry, as the PI and Co-I of the research projects.