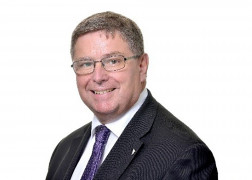 Prior to this, Iain was Managing Director and General Manager of Airbus UK, whose Bristol operation he joined when it was still part of British Aerospace.

Iain Gray completed his early education in Aberdeen, culminating in an Engineering Science honours degree at Aberdeen University. In addition, he gained a Masters of Philosophy at Southampton University in 1989.  Since then Iain has received Honorary Doctorates from Bath, Bristol, Aberdeen, Cardiff, Exeter and the University of the West of England.  In 2014 he was awarded a CBE for services to innovation.

In 2016 he was awarded the Baird of Bute Award for his contribution towards aviation in Scotland.  He is Chair of Aerospace Bristol Museum, a Non-Executive Director for Graphene based company Versarien and is Chairman of technology company CFMS UK Ltd.