Robotics technology has greatly involved the past few years. However in most of the cases robots are slow, fail dramatically under scenarios with uncertainty and have to be temporally or spatially separated from the humans, to ensure humans’ safety. In this project, we venture to develop the required theory to overcome the previously mentioned limitations and demonstrate dexterous collaborative human-robot manipulation scenarios. In such a scenario, a robot agent can collaborate with a human, as naturally as two humans would do. Looking into the future, the direct impact of this research to the society, is to be found in daily scenarios, where robots will accommodate humans in large objects manipulation tasks. Robots will relieve humans from cumbersome physical loads, while the higher level goals of the tasks are governed by humans.

The project is funded by Honda Research Institute.

His first experience in robotics research was during his diploma thesis 2011 at the University of Patras, under the supervision of Prof. Antony Tzes. Theo explored sampling based methods, specifically Particle Filters towards adressing the SLAM problem for a mobile ground robot. Being fascinated from his first experience in the field, in January 2012 he moved abroad and joined the Institute of Robotics and Mechatronics at the Aerospace Center of German (DLR). At DLR he primarily worked with Dr. Máximo Roa and numerous other great colleagues on grasp planning, dynamic grasp simulations, physics engines and software development. During this period he got familiar with many robotic areas, co-published a number of papers and actively participated in two European projects, namely SMErobotics and EUROC. Driven by his belief that learning is the key towards developing truly intelligent robots. In September 2015 he decided to enhance his education on Machine Learning and Intelligence Robotics, joining the MSc in Artificial Intelligence at the University of Edinburgh. His MSc thesis was on the interdisciplinary area of bio-robotics, were under the supervision of Prof. Barbara Webb, he developed an onmi-directional robot with 360-degrees vision, that immitates the behaviour of fiddler crabs under predation. During his MSc he also had the luck to get to know Prof. Sethu Vijayakumar, and enrol at the ECR in September 2016 as a PhD student, under his and Dr.Michael Gienger's supervision.  His PhD studies are funded by the Honda Research Institute Europe, during which he aims to develop learning based physical interaction models and intention-prediction methods, towards extending the set of human-robot collaborative taks achieved. Further, his is also very keen on investigating machine learning methods that allow the blending of multiple optimal elementary policies into emergent complex policies. He believes that the key for the robots to attain complex behaviours is; to construct complex policies from elemetary ones.

MSc. in Artificial Intelligence (Hons) with specialisation in Machine Learning and Intelligent Robotics from University of Edinburgh, 2016, UK

Dipl. (equivalent to BSc + MSc) in Computer Engineering and Informatics from University of Patras, 2011, Greece

Researcher at the Insitute of Robotics and Mechatronics of the German Aerospace Center (DLR) from January 2012 till July 2015, Germany 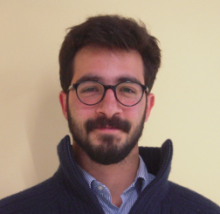