Our Future Scotland Premiere and Launch 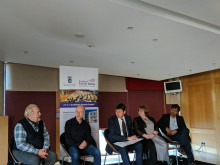 Professor Sethu Vijayakumar joined a panel of Scottish leaders at the Scottish Parliament on Wednesday 16th May in a discussion exploring the aspirations for Scotland in 2030.

During the event, run by Scotland’s Futures Forum and the RSE’s Young Academy of Scotland, a video and engagement project to explore people’s hopes and fears about the changes that would face the country in the coming decades.

#OurFutureScotland is seen as a challenge that affects everyone – from the First Minister and other party leaders, to leading business and technology figures, and high profile authors and artists, so a film was screened that posed questions about the Scottish people's ideas of their country's immediate future and considerations about the kind of country they would wish it to be in the future.

The film that was screened at the event can be viewed here: https://www.youtube.com/watch?v=Y6QOeS37XvQ