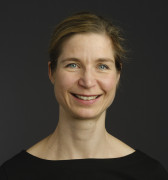 Verena Rieser is a Professor in Computer Science at Heriot-Watt University, Edinburgh, where she is affiliated with the Interaction Lab.   She is also a co-founder of the Conversational AI company Alana AI.  Verena received her PhD in 2008 from Saarland University and then joined the University of Edinburgh as a postdoctoral research fellow, before taking up a faculty position at Heriot-Watt in 2011..  Her research focuses on machine learning techniques for spoken dialogue systems and language generation, where she has authored over 100 peer-reviewed papers.  Verena is the PI of several funded research projects and industry awards. She was recently awarded a Leverhulme Senior Research Fellowship by the Royal Society in recognition of her work in developing multimodal conversational systems.
Her most recent research efforts include the Amazon Alexa Prize, where her team reached the finals twice in a row and the End-to-End NLG Shared Task, which her team organised. She is currently one of the co-chairs of the BigScience community effort in building large language models.